Just over two years ago, I started the No Crap App (to several snarky remarks that it’s not ‘actually’ an app) because I believed we were regularly overlooking examples of quality journalism just to make the political point that the ‘MSM’ was crap.

Over time, I expanded the scope of the weekly list to incorporate blog posts and other online commentary that were exemplary quality political writing.

I’d like to think I achieved what I set out to do. Most weeks (and some fortnights, when I got caught up in real life) I curated links to pieces that were thoughtful, well-written and informative. They covered a range of political perspectives, but not as broad as I would have liked. It remains a disappointment to me that there’s a dearth of quality right-of-centre analysis and commentary in the Australian political media and blogosphere.

As some of No Crap App’s readers would know, I’m doing what I can to make a small difference to that shortfall. And it’s for that reason I have to retire the No Crap App, which takes up a chunk of my time and earns not a brass razoo. I need to use that time for paid writing jobs and researching pitches for the job after that.

Having said that, the No Crap App has had some loyal supporters over the past two years and I am extremely grateful for their generosity, without which I would have had to shut down the blog a lot earlier than now.

And so the No Crap App says adieu. Thank you for visiting and reading, and keep up the pressure for quality Australian political writing. 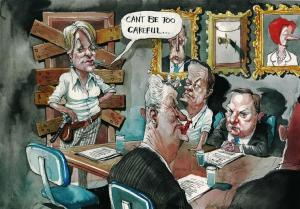 Get the #NoCrapApp on a free mobile app

No Crap App is part of Drag0nista's App, which is now available for free at the iTunes and Google Play stores.

Or get the RSS feed

No Crap App is curated by DragOnista. All rights are reserved by the original authors, artists and publishers.