Note: One of the commenters on last week’s #NoCrapApp survey suggested that I could value-add by prefacing the links I’ve gathered for the week with some commentary. So I thought I’d give it a go. The usual caveats apply: they’re my observations, I’m trying to be objective nevertheless, etc, etc. If you find it an unnecessary distraction, just let me know and I’ll desist. 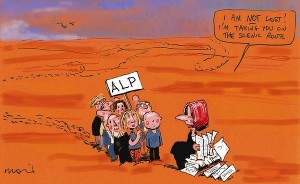 The week that was…

This week was the first in a five week hiatus between parliamentary sessions. This meant journalists had to find stories rather than simply catch those lobbed at them from the parliamentary benches. While journalistic effort to place a current political event into historical context is almost nonexistent in a sitting week, this week we saw quite a number of pieces pondering whether events of the past could help us predict what will happen at the next federal election (in 18 months’ time).

With the election battlefield currently firming on the question of trust, a number of journalists drew parallels with John Howard’s electoral reprieves and his audacious decision to run against Latham on the question of trust. For mine, I can’t see too many parallels between the Little Johnny that most people disliked but trusted to look after the country, and the current predicament that the Prime Minister finds herself in. Meanwhile, the ABC’s psephologist Antony Green gives us a fascinating tour of the cycles in electoral fortunes. The economics writers ponder the Government’s determination to deliver a surplus. Above all, it’s about politics; the Government simply cannot afford to go back on another commitment.

I’ve also included an interesting piece on politicians using Twitter. There is nothing here on Craig Thomson.

Can the past help predict the future?

To surplus, or not to surplus

And last but not least

Damn! How can I get past the paywall?

Get the #NoCrapApp on a free mobile app

No Crap App is part of Drag0nista's App, which is now available for free at the iTunes and Google Play stores.

Or get the RSS feed

No Crap App is curated by DragOnista. All rights are reserved by the original authors, artists and publishers.